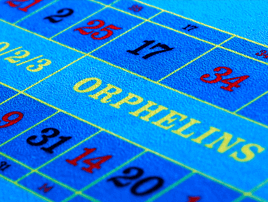 Before we get into even attempting to answer the question of whether playing high stakes roulette can make you rich, it is necessary to point out that anyone viewing gambling as a means of making money is often doomed to fail and is even a sign of a gambling addiction. Betting, wagering and gambling should first and foremost be viewed as a form of entertainment, with winning money seen as an added extra. Just as with other forms of entertainment such as the cinema, restaurant meal or concert ticket, your stake money should be seen as the price you pay for enjoying the entertainment. If you cannot bear the thought of walking away from an online casino or physical gambling or betting establishment having lost this money, then you should not risk it.

The truth is that high stakes roulette can make you rich... but it can also make you poor. There is no denying that wagering big in a game of online roulette or in a casino and having the ball land on the number(s) that you have chosen can reward you with a large sum of money in winnings. However, whilst this is the ultimate dream for those playing roulette, the majority of players will find that in actual fact they end up leaving the casino with less money than they started out with. For one thing, the game of roulette is actually one of the worst for the player and subsequently one of the best for the house, as the hefty house edge on the game of roulette, particularly the American version with the double zero on the wheel, means that over the long term the casino is statistically more likely to take more money from the player then the player wins from them. So for anyone looking to get rich from a casino, roulette is one of the worst game choices to make and is a reason why the vast majority of professional gamblers and high stakes bettors stay away from roulette altogether, or just wager low limits as a brief distraction from their other more profitable games such as blackjack for instance.

Virtually All Casino Games Have a House Edge

Even though blackjack has a much lower house edge and gives players a better chance, with the possible exception of some forms of video poker the reality is that all casino games are slanted slightly in favour of the casino so that over the long run they are more likely to come out ahead. Sure there are winners, often many big winners; and these are in fact good for the casino as they want to attract more players by being seen to pay out large sums of money. But not only will there be more losers than winners, the casino knows that over time the odds are in their favour, and even those who do win large sums of money and become rich at the roulette table will often try and win even more and end up giving most if not all of their winnings back to them eventually.

Remember Gambling Should be Fun!

So whether playing roulette and other casino games for high stakes or low stakes, never set out with the sole intention of making money or becoming rich from them, as you will often end up disappointed, both emotionally and financially.