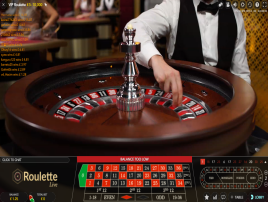 French roulette is rarely found in land-based casinos, at least in comparison to the prevalence of its European and American cousin. Perhaps this is not surprising though, as in terms of low house edge this version of roulette can actually be the most advantageous and profitable for a player, which is presumably why casinos are loath to offer it.


For those unaware or not too fussed about odds and house advantage, playing European roulette or American roulette will prove just as pleasurable, even if it is statistically more likely to result in them losing some or all of their precious bankroll.

We will look at why French roulette is keenly sought after by savvy high stakes roulette players later on in this article, but first let's take a look what French roulette is and what the differences are between it and the alternative and more common versions of roulette.

The Origins of Roulette

The word "roulette" is actually French, and translates as "little wheel" in English. As this casino game is named after a French word, it should come as little surprise that the French version of roulette is the one which most closely resembles the original game of roulette which historians think was invented in 17th century France, although there are earlier versions of similar games which may have influenced the creation of roulette.


However it was started though, people soon realised its suitability for wagers and the potential for profit, and since it was first played in a casino in Paris, the game of roulette (whatever specific version) has become a firm favourite of casinos and gamblers alike, with the roulette wheel often the symbol of casino gambling.

How Does French Roulette Differs from American Roulette?

For starters, French roulette is played using the European wheel, which only has the zero compartment as well as the other thirty six numbered compartments, unlike the American wheel which has all these plus an additional double zero compartment. Having one less possible outcome immediately lowers the house advantage.


But what sets French roulette apart from other versions is the La Partage and En Prison rules, which come into play when the ball lands on zero. These rules only affect those who have placed even money wagers, such as red/black or odd/even.

The La Partage (meaning "the divide") rule simply means that those who place an even money bet get half of their wager back if the ball finishes on zero. For many this makes sense, as if you wagered on red and the ball didn't finish on a black number why should you still lose? Whereas for others they see it that if you bet on red and a red number didn't come up then you should lose your money... this is certainly how the casinos would like to see it anyway!


hatever your stance on the merits of the La Partage rule (which presumably is all players for it and all casino operators against it), the net result is that the rule further lowers the house edge, giving those playing French roulette more potential to profit.

En Prison (meaning "in prison") is similar to the La Partage rule but is slightly different. When this rule is in play at the particular casino, when the ball lands on zero, rather than hose who wagered on even money bets automatically getting half of their stake returned, the croupier will place a marker over the bet, effectively imprisoning in (hence the name), until the next spin. If on this subsequent spin the player wins, their bet is released back to them. If it loses, the house takes it all.


Examples of the La Partage and En Prison rules are described below:


Result: The player immediately has £50 returned to them, with the casino taking the other £50.

It is important that you check which rule is being operated by the casino before commencing play at a French roulette table, but no matter which is being used it will be beneficial to the player compared with playing European or American Roulette, as in both of these versions a player who bets on red will lose their entire wager straight away if the ball lands on a zero or double zero.

Unfortunately, any rule which is beneficial for the player will conversely be detrimental to the casino, which is one of the main reasons why French roulette is difficult to find outside of France. It is quite popular there, either because it is closer to its traditional roots or because French casino patrons demand that it be available, but in the rest of the world, even the other European countries, the French version of roulette can be almost impossible to find in a casino.


Another reason is that although straightforward once taking a few minutes to learn them, the La Partage and En Prison rules can sound complicated and off-putting. A straight "You bet on red and a green zero came up so you've lost your bet" is much more easier to grasp and less intimidating for a novice to get to grips with, even if it does mean that they will burn through their bankroll that much quicker at the roulette table!

Just as many American casinos grudgingly offer European roulette to players who are willing to risk larger sums of money as a compensation for the lower house edge, the same can be said of French roulette, only this time the house edge is so low that many will either flat-out refuse to offer it or only do so to those who are willing to play for extremely high stakes.

Fortunately though, whilst the majority of land-based casinos may not offer French roulette, players can find French roulette online right here, and at stakes which appeal to everyone.


Those wishing to play French roulette online for high stakes can do so at the VIP live dealer roulette table with a maximum of up to £10,000 per spin of the wheel! Plus, unlike land-based casinos which only offer French roulette for high rollers, our players can play for minimums of just £5 per spin.


To get going, simply click on the "Enter Casino" button at the top of the page, and be playing one of the most lucrative versions of the game of roulette in just moments.

Want to play French roulette for free, or just want to practice first before depositing any real money? No problem. Just sign up in the same way and then choose "Demo Play" to play for fun without risking a penny.