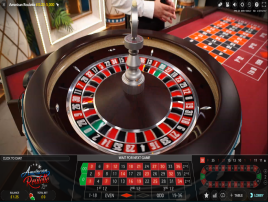 Of all the different variations on the game of roulette, American roulette is probably the easiest to understand. Unlike variants such as French roulette which can have rules and procedures which although straightforward can sound extremely intimidating at first like En Prison and La Partage, the American brand of roulette is quite simple to get to grips with. Rather than mess about with getting half your wager back if the ball lands on zero or the like the American roulette wheel gives a straight no-nonsense answer. Either you've won or you haven't; celebrate or console yourself but either way it's time for the next spin!

Apart from that though, the game is played in pretty much the same way as the European and French equivalents. Casino chips are placed on the betting table, the wheel is spun by the croupier, and winnings are paid to those who have won.


The main thing a player needs to understand is which version of roulette they are playing and the various rules associated with it, as these can significantly affect the house edge and a player's roulette betting strategy. Not only can different casinos differ, but even tables in the same casino can have different rules in place from one roulette table to the other. Always check and understand what rules are in force before placing any bets, particularly when playing French roulette.

Where to Play American Roulette

American roulette is most commonly found, unsurprisingly, in America. Whilst European roulette may be "the norm" in casinos in Europe, in the United States nearly all the roulette tables that you will see in a casino will play with the American version of the wheel. Some US casinos will offer roulette using the European wheel, but this is often only to be found in the high limit roulette areas of large casinos such as those in Las Vegas, Reno or Atlantic City who have enough high rollers coming through their doors on a regular basis who are seeking to play European roulette.

Just want to play American roulette for free without risking your cash, or would like to try out the game for fun first? Simply enter the casino and sign up in the same way, and then choose the "Demo Play" option to play the same great casino games but for pretend money.